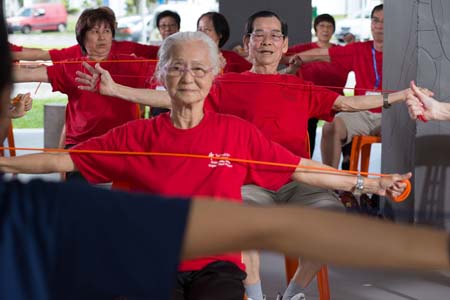 Being lonely can be deadly for seniors.

The risk of dying prematurely increases by 1.7 times for seniors who live alone, revealed a study by the Department of Psychological Medicine at the National University of Singapore. For older men, the risk nearly triples.

The majority of seniors who called suicide prevention agency Samaritans of Singapore faced issues such as physical and mental health ailments, financial and relationship issues, and loneliness.

About 32 percent of older people in Singapore reported being sometimes lonely, and 19 percent report being mostly lonely, revealed a study led by Associate Professor Angelique Chan of the Duke-NUS Graduate Medical School, released in 2014.

Recognising the need to engage the increasing number of elderly in Singapore, MWS is launching three new Senior Activity Centres (SAC) in 2016.

Most current SACs in Singapore cater to seniors living in rental flats, leaving out those who live in flats they owned but also face similar risks of social isolation.

Large sections of their social networks have fallen away following their retirement and deaths of their friends and spouses. They are also likely to have difficulty moving about due to age and chronic ailments. Venturing further from home is challenging to say the least.

Providing the Warmth of a Community

At the new MWS Senior Activity Centres to be located below HDB blocks at Fernvale, Sims Place and Teck Ghee, seniors can look forward to engaging programmes and activities that cater to their multi-dimensional needs. The centres also include state of the art community gyms specially designed for seniors, to optimise impact to their physical fitness and health.

These programmes bring the seniors in the neighbourhood together to form a new community and “kampong” spirit. When seniors experience physical and socio-emotional well-being, the chronic effects of ageing can be delayed.

In addition, the centres will also be linked to the studio apartments’ Alert Alarm System (AAS) and are able to respond to emergencies faced by seniors living alone.

The centres are targeted to open in the second quarter of 2016. As the government does not provide any funding for SACs catering to seniors living in studio apartments, MWS has to run these centres entirely on a self-funding basis.