The Healing Power of Words 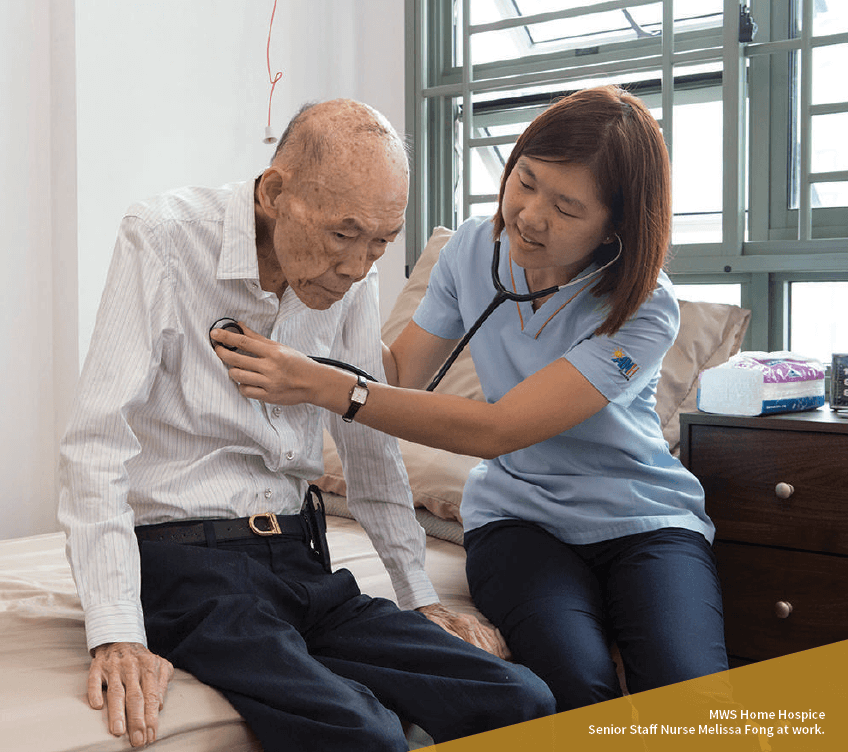 Nobody likes to talk about dying. For many Singaporeans, death is a taboo topic that is seldom discussed. But for those providing palliative care, talking about death is not a choice but a responsibility.

For MWS Home Hospice staff who provide palliative care in the patients’ homes, the relationship with the patient is especially intricate and deep.

Beyond attending to medical and nursing demands, they are drawn into the patients’ private sphere where they get to know and understand more about the lives of patients and their families. As the relationship matures, it opens conversations that are otherwise sensitive and difficult to broach.

MWS Home Hospice Senior Staff Nurse Melissa Fong shares the difficult conversations that she has with her patients to prepare them and their families for the end-of-life journeys.

One of the most common questions that patients and their families ask is: “How long more do I have?”

“Nurses at MWS Home Hospice have to choose their words very carefully. Sometimes, the patient who asks such a question may not really want to know the answer. And neither do we have the answer. More often than not, the patient is acutely aware of his deteriorating health condition, and the truth can be hard to bear,” says Melissa.

Often, she would also encourage them to ponder their feelings and come to terms with the end of life.

At other times, a reassuring pat is all that is needed. Melissa shared the case of an elderly lady who simply refused to discuss matters related to her last days. Whenever the topic came up, she was silent. However, the tears welling in hereyes betrayed her feelings. In moments like this, Melissa offers her comfort in silence.

TELLING LOVED ONES BEFORE IT IS TOO LATE

Watching their physical body deteriorate day by day, palliative care patients commonly exhibit volatile emotions and vent their frustrations on those closest to them, and these are often their caregivers.

Caregivers have the enormous task of caring for their loved one 24/7. They have to bite their tongue, take in the negative outbursts and still provide emotional support. This aspect of care is especially challenging, since they too are grappling with the eventual loss.

Despite the love and appreciation that patients feel for their caregivers, they may not know how or when to express it.

Melissa recounts the story of a wheelchair-bound patient who suffered from a brain tumour that impaired his speech. Every day, his wife worked tirelessly to care for him.

One day, Melissa probed him to think of one thing he would like to say to his wife.

When he mouthed the words “I love you”, she broke into tears. The magical and touching moment for the old couple was also a timely one, as the patient became unconscious a week later and subsequently passed on.

WAITING FOR THE RIGHT TIME

While patients or their families may not be ready to talk about end of life, it does not mean they never will. Melissa explains that for patients who are not ready to talk, she will focus on building a rapport with them first.

Asking mundane questions, she says, may help to lead into the main conversation. “What did you eat?” or “How has your day been?” are just as important as “How would you like your funeral to be?” These routine questions may help the patient open up and feel more at ease to discuss deeper, more thought-provoking subjects.

MWS is one of only a few charities in Singapore that run an integrated home hospice and home care service for chronically ill and frail people.

Melissa shared the case of an elderly lady who seemed indifferent about her mortality. It all changed when she read a birthday card that her grand-daughter wrote her. It moved her so deeply that she decided to write cards to those who mattered to her. With the help of MWS Home Hospice nurses who penned her wishes and thoughts down for her, she was able to leave behind important last words for her loved ones.